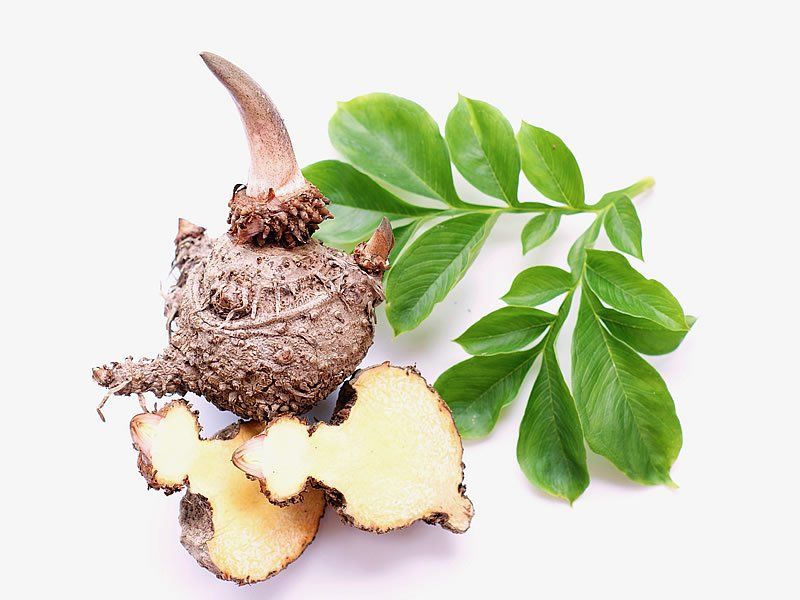 Glucomannan is a water-soluble dietary fiber extracted from the roots of the Asian konjac plant. As a food supplement, konjac glucomannan has become very popular in the United States and Europe in recent years, mainly because of its positive effects on cholesterol and weight control.

With constantly new nutritional supplements on the market, it’s not easy to discover which supplements really work and which are just a big hit on your wallet. What are the unique properties of glucomannan and can glucomannan really contribute to weight loss? In this article, you will learn everything you need to know about this fiber supplement.

Glucomannan is a water-soluble dietary fiber derived from the root of a plant called konjak. The plant grows in the warm subtropical regions of East Asia. It is also known by other names such as elephant yam, konjaku and konnyaku potato. The konjak plant is low in calories and has a high dietary fiber content.

Glucomannan consists of 40% of the dry weight of the plant, and is often used in Asian cuisine as a food additive because it acts as a thickener. Konjac glucomannan has a long history in Asian herbal medicines and foods.

In many Western countries glucomannan as a dietary fiber has recently received media attention because it would work as a weight-loss supplement. You can read the answer further on in the article.

Konjak glucomannan now has an E-number (E425) (source). You may be wondering what e-numbers are. E-numbers are codes for substances that may be used as additives in food within the European Union.

A ‘normal’ portion of glucomannan powder is half a teaspoon (2 grams) containing about 5 calories and 2 grams of fiber (source). This satisfies about 8% of the daily fiber requirement.

The functions of glucomannan

The fiber of the root tuber absorbs exceptionally large amounts of water in the intestines and then becomes gelatinous. This intumescent gel can fill the stomach and intestines and promotes a feeling of fullness, which affects energy intake (which means you eat less calories on average per day) (source).

It absorbs so much liquid that if you dropped a glucomannan capsule in a small glass of water, its entire contents would turn into viscous, gel-like substance! Can these unique properties of glucomannan help with weight loss?

Researchers think that glucomannan can help with losing weight through different mechanisms in the body:

Animal studies have shown that these friendly bacteria can reduce fat storage (source, source). Please note that the results of animal studies cannot be transferred directly to humans.

Can glucomannan be used as a weight loss aid? That is undoubtedly the most important question in this article.

Studying results from animal studies can be interesting, but what we really want to know is whether the use of glucomannan as a food additive can lead to more weight loss in humans.

Fortunately, several randomized controlled trials (also called RCT’s) after glucomannan have been done. Such scientific experiments in humans are considered to be the best research method.

In a randomized controlled study conducted in 2005, several glucomannan supplements were tested in overweight people. The participants were randomly given different doses of glucomannan or placebo capsules while on an energy-restricted diet (source).

The use of glucomannan in combination with an energy-restricted diet led to significant weight reduction among participants compared to the group using a placebo. The different glucomannan doses in this study did not show any significant differences.

In an 8-week double-blind, placebo-controlled, randomized study, 20 obese participants were randomly assigned to consume either glucomannan or a placebo of starch (source). The participants were given 1 gram three times a day for 8 weeks (divided into two capsules of 500 mg each) and took it with 235 ml of water before each meal.

Research results: The participants followed their usual diet and level of exercise. Weight loss was significantly higher in the glucomannan group (-2.5 kg) than in the placebo group (+0.7 kg).

In a double-blind, placebo-controlled, randomized study conducted in 1995, 30 overweight women were treated for 60 days with an energy-restricted diet (1200 calories) and glucomannan supplementation or a placebo (source).

A total of 4 capsules of glucomannan or placebo were taken daily with 1-2 glasses 30 to 60 minutes prior to the two main meals (approximately 4 g per day).

In another double-blind, placebo-controlled, randomized study, 52 healthy overweight participants were randomly assigned to take glucomannan or a placebo for 5 weeks in combination with a low-calorie diet (1200 calories) (source). Three different glucomannan supplements at different doses were tested.

Some supplements also consisted of other fibers. Glucomannan or placebo was administered in tablets with 250 ml of water 15 minutes before each meal (three times daily) and at 15.00 a dose.

Research results: Weight reduction during the intervention period was significantly higher in the glucomannan group than in the placebo group. Adding guar gum and alginate had no significant effect on weight loss. All glucomannan supplements used in this study in combination with a low-calorie diet of 1200 kcal led to significantly more weight loss than placebo and a low-calorie diet alone during a 5-week observation period.

In a 1992 study, 50 obese individuals (including 15 males) were randomly assigned to consume a hypocaloric diet (1000 calories for females and 1300 calories for males) alone or together with glucomannan supplements (2 + 3 + 3 capsules containing 300 ml of water before meals, about 4 g per day in three doses) for 3 months (source).

Research results: At the end of the study, the researchers reported significantly more weight loss in the glucomannan group compared to the control group. Other findings included improved lipid status in the blood and improved carbohydrate tolerance.

In a 1993 double-blind, placebo-controlled randomized study, 60 obese children under 15 years of age (average age was 11.2 years) were randomly assigned to consume glucomannan (two capsules with two glasses of water 1 hour before each meal, 2 g per day) or a placebo for 2 months on a low-carbohydrate diet (normocaloric diet (source). The supplement and the placebo were indistinguishable, both for the family and the doctor.

Research results: The number of overweight children decreased significantly during the study in both the intervention and placebo groups without significant differences between groups. No differences in body weight between the groups were observed at the end of the study.

This ‘waxwood period’ is a period during which the participant stops using the supplement or placebo in order to eliminate the effects of the treatment. No statistically significant differences in body weight changes were observed between the glucomannan and wheat bran groups.

From the above studies, it appears that a daily intake of 3 g glucomannan supports weight reduction when following an energy-restricted diet.

To obtain the claimed effect, at least 3 g of glucomannan should be consumed daily in three doses of 1 g each, together with 2 glasses of water before meals, in the context of a low-calorie diet. The target population is all overweight adults.

Glucomannan and a healthy cholesterol level

A systematic review in 2008, in which fourteen randomized controlled studies with glucomannan were investigated, showed that the use of glucomannan appears to have a beneficial effect on total cholesterol, LDL cholesterol, and triglycerides values and significantly lowers them (source).

Glucomannan had no effect on HDL cholesterol or blood pressure. The most important way glucomannan reduces blood cholesterol is by reducing the absorption of cholesterol in the intestine (source). It can be concluded that a daily intake of 4 g glucomannan contributes to the maintenance of a normal cholesterol level in the blood.

Possible interactions and side effects

Glucomannan powder (Konjac) is generally considered safe for healthy adults when used as a dietary supplement.

Glucomannan is available in capsule form, as a drink mix and in food products, including flour and pasta. It is no longer available in tablet form because contact with water can cause tablets to swell before they reach the stomach.

When taking the capsule shape, make sure to always take it with plenty of water. Think of 1 to 2 glasses of water when ingested or other liquid. The use of glucomannan may be safe, but there are minor risks and side effects, so caution should be exercised when using glucomannan.

Side effects are rare, a small proportion of users experience bloating, flatulence, soft stools or diarrhea. In this case, it is advisable to stop immediately.

Glucomannan can also reduce the absorption of medication such as sulfonylurea (a diabetes drug). This can be prevented by taking the medicine at least four hours after or one hour before taking glucomannan.

Glucomannan has been shown to lower blood sugar levels and should not be taken in combination with medications or other dietary supplements that have hypoglycemic effects.

According to the EFSA (European Food Safety Authority), after a daily dose of 3 g of glucomannan in adults for 12 weeks, abdominal complaints (bloating, mild diarrhea, constipation) may occur in some people (source).

If you are pregnant or breastfeeding, it is unwise to use glucomannan anyway, as the influence of glucomannan under such circumstances has not been investigated.

Research on the internet shows that most people are satisfied with the use of glucomannan as a food supplement:

In the past I’ve tried several different food supplements. Little worked for me because I was constantly hungry. I am very satisfied with glucomannan! It makes you feel full while on a diet. It suppressed hunger enough and gave me the willpower to stick to the diet. I lost weight and I lost waist circumference.  – Manon, Groningen.

Glucomannan is a great addition to weight loss! My husband told me about it, I now use it daily and I certainly recommend it to other people. I just felt a bit bloated sometimes, but not in such a way that I had to stop. – Ingrid K.

Works best if you take it 30 minutes to an hour before dinner. I notice I’m not really hungry when I’m eating a meal. I’m losing weight right now because I’ve been eating less. As long as you don’t drink away too many calories (be a beer lover) you will be able to lose weight more easily with glucomannan. I finally fit back into my jeans from ten years ago! Anthon, 52 years old.

There are some users who report mild side effects such as flatulence and bloating. Many users are satisfied with the supplement because of a reduced appetite while on a diet. As a result, people are able to lose weight more easily without being too hungry.

Start with the recommended dosage per day and drink enough water (1 to 2 glasses of water) when taking the capsules to prevent expansion of the capsules in the throat. I advise to always take the capsules half an hour before meals.

Glucomannan can nowadays also be eaten as pasta (penne, spaghetti) and noodles. Because the vegetable fiber of the Konjak plant is low in calories and gives a long-lasting feeling of fullness, it is ideal to use as a substitute for durum wheat pasta.

Where can you buy glucomannan pasta and noodles? Nowadays the glucomannan products are available in most drugstores and even at Jumbo supermarket.

Note that the beneficial effect of weight loss is obtained only at a daily intake of 3 g of glucomannan in three doses of 1 g each, together with 1-2 glasses of water, before meals and in the context of an energy-restricted diet.

Since these are specific numbers, it is better to use capsules instead of other glucomannan products.

Science shows that glucomannan can support weight loss in the context of a low-calorie diet. But as always, there is no magic slimming pill. A diet based on healthy and varied eating combined with regular exercise are the most important unwritten rules for a slim and healthy body.