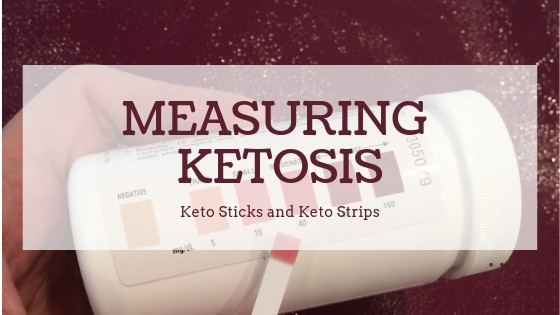 Ketosis is a metabolic state, with your liver metabolizing fats and producing ketone bodies from fatty acids. These ketone bodies are then used by your body as a primary source of energy as part of the ketogenic diet.

How can ketosis be measured as accurately as possible?

Of course, when you start to diet in a ketogenic way, you want to know whether you are already in ketosis or not. In addition to the common signs of ketosis, there are various methods to accurately measure the number of ketone bodies in your metabolism.

The three most common and best ways to measure ketosis are:

In the course of this article, we will introduce you to these three measurement methods in more detail, explain in more detail how they work and help you choose the optimal variant.

Urine strips are the easiest and cheapest way to measure ketosis. For beginners, this variant also provides the necessary accuracy to determine the correct stage of ketosis with a relatively high probability.

If you have just started the ketogenic diet, it makes no sense to carry out complex blood tests. These tests will not be interesting until you want to understand the nuances of ketosis at an advanced stage.

Urine tires are incredibly easy to use. You keep the stripes in your urine for a few seconds and after just 15 to 20 seconds the color of the measuring fields changes depending on the number of ketone bodies in your urine.

The color of the urine tires usually becomes redder as the number of ketone bodies in your urine increases. A light pink suggests low production of ketone bodies. A deep dark red indicates that you have already progressed far in ketosis.

Urine tires are a great way to determine whether you are in ketosis or not, but they lack the necessary accuracy to accurately determine the number of ketone bodies in your blood in the mmol area.

Instead, they measure the acetoacetate content in your urine. This form of ketone bodies are not fully used by your body for energy production, but excreted by the urine. Here, the residues can be detected using appropriate methods.

The longer you are in ketosis, the more efficiently your body can utilize ketone bodies in your organism and the less accurate this method for measuring ketosis becomes.

The first time you are completely in ketosis, the urine strip will most likely turn dark red on the first test. After a few weeks, despite high ketone levels in your blood, with urine strips you will only see a slightly pink color.

While many people think that’s a bad sign, this development suggests that your body can metabolize the ketone bodies in your organism more efficiently. Therefore, urine strips are a relatively inaccurate method, especially in the long term, to objectively measure your ketone levels.

The biggest advantages of urine tyres are that they are easy to use and cheap to purchase. You can order them directly from Amazon for a few euros and use them without much prior knowledge.

The biggest drawback is their inaccuracy. On the one hand, the results become less and less accurate the longer you are in ketosis and, on the other hand, the level of your hydration can also lead to different measurement results with the same progress of ketosis.

Their disadvantage is the high acquisition costs of the device itself, as well as the running costs of the individual test strips. While the purchase price of the device over time turns to the number of measurements, the cost of 1 euro per test strip remains the same. However, if you want to expect accurate results, you have to be prepared to invest that amount.

In addition, you have to be aware that you have to put a small stitch in your index finger for each measurement. Even though most people can look past this little pain, you should be clear about it.

Online, you will regularly find good deals for low-cost measuring devices. However, manufacturers build their devices in such a way that they can usually only be operated with the brand’s own measuring strips — which in turn can really go into the money in the long term.

So decide smartly and include the price per test strip in your bill before buying the device.

Devices with which you can measure ketosis through your breathing air have become more and more popular in recent years — not only because of their simplicity —.

You can easily connect the device to your computer via USB. Then you blow vigorously into the device. This allows the system to measure the level of acetate in your breathing air. This gives you pretty accurate information about how many ketone bodies you have in your bloodstream.

These breath tests usually cost between 120 and 170 euros and are therefore the most expensive variant of the measurement of ketone bodies in the purchase. If you have just started the ketogenic diet, I recommend you wait until you reach a slightly more advanced stage. Then it makes sense to invest the above amount in a higher accuracy of the measurements.

Then, if you’re at a point where you have to choose between a blood meter and a breathing meter, I’d advise you to pay the higher amount upfront instead of repeatedly paying money for individual test strips, as in the case of the blood monitors Must.

In the course of the scientific application of the breathing monitors, a relatively stable correlation has emerged between the amount of acetate in your breathing air and the number of ketone bodies in your blood. Even though breath tests show far greater accuracy than urine tests, they show a greater spread compared to direct blood tests. This can lead to more inaccurate results and incorrect conclusions about the stage of ketosis.

If lower long-term costs are more important to you than the last 5 percent accuracy you should opt for a breath test. If you only attach importance to the highest possible measurement accuracy, it makes sense to invest more money in a blood meter and sufficient measuring strips.

What values can be measured in ketosis?

Because blood tests have the highest accuracy of all measurement variants, we will use them as a primary example. If you can have less than 0.75 mmol ketone bodies per liter of blood, you are basically not in ketosis.

From values of more than 0.75 mmol/L, it is referred to as ketosis. In this area, you can also feel the classic symptoms of keto flu in the course of the first few days.

Using the following graph and the readings of your breath or blood tests, you can measure whether you are on your way towards ketosis or not. Often the process takes longer than expected to get to ketosis and you have to try some things from the athletic activity to the right foods and other factors in order to get into ketosis in the long term and stay in ketosis.

If you’re already in deep ketosis anyway, you should be more careful. Values above 3.0 mmol/L indicate that your body produces a large amount of ketone bodies. However, the positive effects on your body and mind are the same as those of 2.5 mmol/L.

If you regularly measure levels above 3.0 mmol/L, this may indicate that you consume too few calories through your diet. Ketosis can also occur even if, for example, man suffers from hunger and generally consumes too few calories. This is not the point of the matter and you should replace missing calories with high-quality fats or protein.

At the end of the day, as a kind of side note, we should also be talking about too high ketone levels. Values above 6.0 mmol/L usually indicate a dangerous metabolic state called ketoacidosis. Even if it is almost impossible to reach such high value as part of a standard ketogenic diet, you should regularly measure the stage of ketosis and see a doctor immediately in case of elevated ketone levels!

To get the most out of your ketogenic diet, you should regularly measure the progress of your ketosis and adjust your diet and lifestyle accordingly in case of too low or too high ketone levels.

Basically, you can measure ketosis through your breath, urine and blood. Urine tests are the cheapest, but at the same time the most inaccurate variant. Breathing tests are the most expensive option in the purchase, but they have no additional costs per test and convince with a solid accuracy.

Those who value the highest accuracy should opt for blood tests. In the long term, however, this is also the most expensive way to measure ketosis.

From blood chain levels of more than 0.75 mmol/L is referred to as the state of ketosis. All values above 3.0 mmol/L are usually considered too high. In this case, you should consume more calories and settle in between 1 and 2.5 mmol/L over the long term to achieve optimal effects!