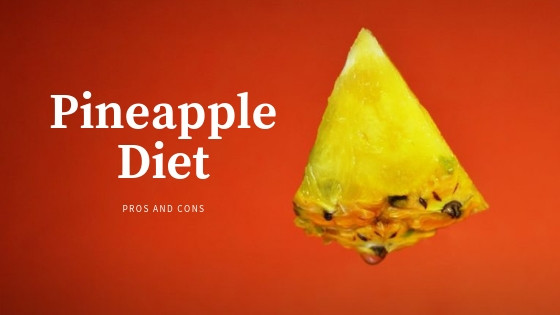 The pineapple diet is a mono fruit diet. In such diets, (almost) only a single food is consumed, in this case pineapple. The calorie intake is reduced to about 1,000 kcal per day. The protein splitting enzyme bromelain contained in the fruit is said to melt the fat in this diet form. Learn more about performing and taking risks of the pineapple diet.

What is the pineapple diet?

Actually, the principle of the pineapple diet is quite simple: Spread throughout the day, you consume a large amount of pineapple or pineapple juice. In addition, around three litres of water and unsweetened tea are drunk every day. The energy is absorbed in the pineapple diet food-conditioned 90 percent over (short-chain) carbohydrates, fat and protein are lacking.

How the pineapple diet works

The thesis pineapple diet is as follows: The protein-splitting enzyme bromelain, which is contained in stalk and juice of the tropical fruit, is to be eaten in large quantities, thereby boosting fat burning. Bromelain is also extracted industrially and used, for example, to make meat softer.

Over a period of time, all meals are replaced by pineapple fruits or pineapple juice. More than 1,000 to 1,100 kilocalories per day should not be exceeded, which is roughly equivalent to two large fruits (around two kilograms).

The pineapple diet is kept over three to seven days, it belongs to the so-called crash diets. These attempt to lose a lot of weight within a very short period of time due to a radical change in diet.

In fact, success on the scales is very soon visible in the pineapple diet. The rapid weight loss at the beginning lies in the draining and often laxative effect of the fruit.

Bromelain, various studies show, has an anti-inflammatory effect, for example in infections or rheumatic ailments. Scientific research also suggests that people whose bodies are well supplied with vitamin C (a fruit containing a fifth of an adult’s daily requirement at about 20 milligrams per 100 grams) tend to have a lower waist circumference Have. Nevertheless, there is no evidence that this can really help with losing weight.

The fact that a lot of fluids are absorbed during the pineapple diet can be helpful for circulatory problems.

Risks of the pineapple diet

This form of nutrition results in significant deficiencies in minerals and vitamins. You hardly eat fat and protein. The low protein intake can lead to (massive) muscle loss.

Since the liver can only process a certain amount of fructose, the rest ends up undigested in the small intestine. This often causes bloating or diarrhea. The large amounts of pineapple can also cause problems with too much stomach acid. Additionally, many who have tried the pineapple diet complain that their mouths became completely sore after a few days. This is due, on the one hand, to the high proportion of fruit acid, but also to the bromelain.

Mono diets like the pineapple diet are unbalanced and monotonous. If they are carried out for more than five to seven days, there is a risk of deficiency symptoms. Although the initial water loss and the reduced amount of calories are rapidly reduced, a learning effect in terms of balanced nutrition and thus a permanent weight reduction does not occur with this method. The fat-melting effect of bromelain on the pineapple diet is not scientifically proven.