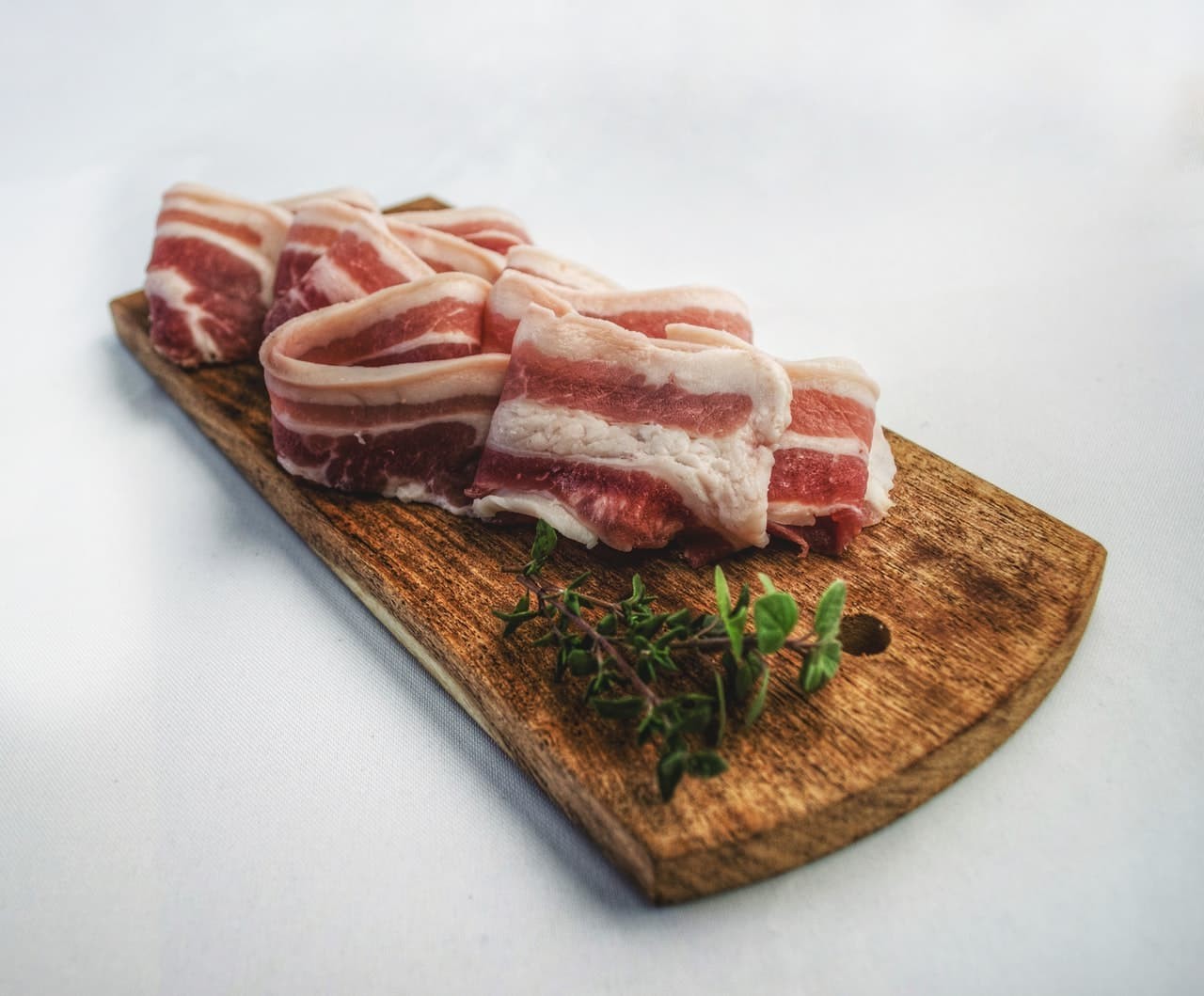 The Carnivore Diet is the latest nutritional trend from the USA. What sounds like Christmas to some people every day, is total nonsense to others from the outset. But what is behind the carnivore diet – and can it really be healthy?

More and more people start following the carnivore diet each day. Some of them have some partly fabulous stories to tell us about this diet . But what does “Carnivore Diet” even mean?

What is The Carnivore Diet

This part’s about the basics. First I introduce a definition (What can I eat at Carnivore Diet?). Afterwards it is about the underlying theory and the hoped for health benefits.

You’re wondering what exactly the Carnivore Diet is? Well, there’s no single definition:

The Carnivore Diet allows you to eat everything that runs, swims or flies.

Followers of this carnivore diet eat:

*There are followers who eat eggs and dairy products, but then in moderation. And there are purists who do without it.

Shopping on carnivore: One time everything please.

You’re probably wondering, “Why is that good?” After all, it pretty much contradicts what is known as common nutritional recommendations: eat less meat, but more vegetables, fruit and wholemeal products.

The Carnivore Diet is based on three assumptions:

It’s all right so far. But I’ll go into the details below.

Followers of the Meat Diet report from :

That list look familiar to you? I’ll explain why below. At least a possible reason.

The meat diet under the magnifying glass

Sounds pretty good so far. 24/7 steak, bacon, eggs, fish and seafood and eat something for your health. A dream for some people!

This explains the increasing popularity of Carnivore Diet, which is currently making headlines in the USA in particular. Until the trend gains a foothold here, it’s only a matter of time. Until then, however, I want to bring the high expectations down to the ground of reality.

The Carnivore Diet is little to not investigated at all

The health effects of Carnivore Diet are not investigated. If one deals with the topic, one could think on the basis of the numerous experience reports that one would be dealing with a gigantic study fundus. But nothing of the sort.

There are no clinical control studies. No long-term studies. Not even a significant number of human studies. The arguments of the meat diet advocates are mostly supported by animal studies and biochemical theory.

In my opinion, everyone should be allowed to eat whatever they want. But then to want to support it “scientifically” with partly hair-raising arguments misses the intended effect. But the problem is also known from other nutrition trends.

Meat contains all nutrients. You did?

Further up I wrote that the Carnivore Diet would provide all the important nutrients. For protein, fat, minerals such as zinc and iron and vitamins such as B12 and A this may be true. But when it comes to a fabric, there’s got to be a question mark behind it: Vitamin C.

According to her followers, the meat diet does not require high vitamin C amounts. By not using carbohydrates, the absorption of vitamin C would be promoted.

At least that’s the theory. The extent to which this mechanism buffers the low vitamin C uptake in Carnivore Diet has not been investigated.

Yeah, but what about the Inuit? They only eat meat! That’s not exactly true. First, the Inuit also eat berries during the short season. And besides, they really eat all kinds of meat. Among other things, oily whale skin that provides vitamin C and collagen.

Of the 13 vitamins we need to survive, one is probably missing out. But that’s not all. The vitamins E and folate (folic acid) are also almost exclusively absorbed via plants. And if we absorb too little vitamin E, we also have problems absorbing and utilizing vitamin K.

The health benefits look familiar to you?

All popular nutrition trends have one thing in common: their followers celebrate improvements.

How is that possible? All positive experiences result from their negative history.

In order to change your diet, you have to be dissatisfied with your current state. (Or just curious, but that’s the exception.) The Carnivore Diet is an elimination diet, a pretty gross one. In fact, some problem foods are omitted. No wonder that there is an improvement, at least in the short term.

However, this is by no means an exclusive phenomenon that only applies to the meat diet.

Moreover, an elimination diet is not a long-term approach, but a reset. Building on this, the diet can then be expanded again to include nutritious and tasty foods.

So the success stories of Carnivore Diet followers are nothing more than … stories.

Anyone today who tries to prove with scientific sources that this nutritional trend is healthy and harmless is doing eyewash. There is simply no evidence.

There are countless bacteria in our intestines, especially in the large intestine. We call this colony in the colon intestinal flora. And it is enormously important for our health, because they are not only decisively involved in the smooth functioning of the immune system, but probably also protect our colon against diseases such as colon cancer.

To keep our intestinal flora healthy, it needs food. How convenient that they like to eat exactly the bacteria that we can’t do anything with: Dietary fiber. These, in turn, are predominantly found in plants. When Carnivore Diet followers do not eat plants, they deprive the intestinal flora of part of their food.

It’s got changes in the composition of the bacterial cultures. And that this has consequences and health Risiken is undeniable. It is not the best idea to risk this millennia-long relationship between humans and bacteria.

The harmful substances in plants are not so harmful at all

Horror stories of harmful substances in plants have been going on for a long time. They are called lectins, trypsin inhibitors and phytic acid, are found in green leafy vegetables, legumes, nuts and seeds and are whole, very evil. At least in theory.

Plants actually contain substances that range from “a little unhealthy” to “toxic”. This also makes sense from a plant point of view. After all, the vast majority of plants want to protect themselves from predators. So they produce bitter substances and other substances that are supposed to deter predators, us.

But not only do we find these substances not good, but also cancer cells. Studies have shown that some of the demonised substances in plants are anticancerogenic. The data available on these substances is generally thin and there is often a lack of randomised control studies on humans.

And all in all one can assume on the basis of today’s facts that the advantages of vegetable food clearly outweigh the dangers.

Even the most ardent meat fan cannot deny that a diet consisting primarily of meat is not environmentally friendly. Even if the meat is bought regionally, even if it does not originate from mass animal husbandry, an enormous amount of water and feed is still used for production.

For plant production we also need water, land, fertilizer and vehicles. And yet the differences in required resources, especially water, are enormous. In addition, large quantities of the plants produced worldwide are processed into animal feed.

And why are people so well off eating only meat?

But why do more and more people report that they are doing so well with this form of nutrition? If we assume that the reports are true and the positive effects are actually observed, I will briefly explain the background.

If you only eat meat it also means: few to no carbohydrates. This in turn results in low insulin levels and the associated positive effects. Low insulin levels also affect the “hunger hormones” leptin and ghrelin; you are less hungry.

This benefits an effect called Food Habituation. Studies have shown that people who eat the same thing every day eat less over time. Low insulin levels and food habituation provide simplified speaking for a lower calorie intake. And the weight loss.

In addition, it seems logical that Carnivore Diet causes certain physiological processes that normally occur during fasting. This is partly due to the aforementioned low insulin level. By the way, such a diet is called “fasting mimicking diet“, a form of eating that imitates fasting.

Conclusion on the Carnivore Diet

I don’t think Carnivore Diet will mutate into a nutritional trend for the masses. She owes the current hype in the USA to well-known supporters such as the Canadian psychology professor Jordan Peterson and his daughter Mikhaila.

Due to a lack of sound long-term experience and the risks mentioned, not least because of the effects on the environment, the pure meat diet should not be more than a good cheat day. Let’s get out of here. Morning, noon, night, steak. What real men. And tomorrow there’s salad again.

I’m not recommending it to anyone. But honestly, it’s not my job to decide if you want to try it or not. And if you have read the article so far, I assume that you can judge quite well whether it would be a good idea.

Trends generate counter-trends. After half the world has tried vegan, the time seems to have come for carnal lust. What comes after that? I don’t know. I’ve got a suggestion: The Cookie Diet.