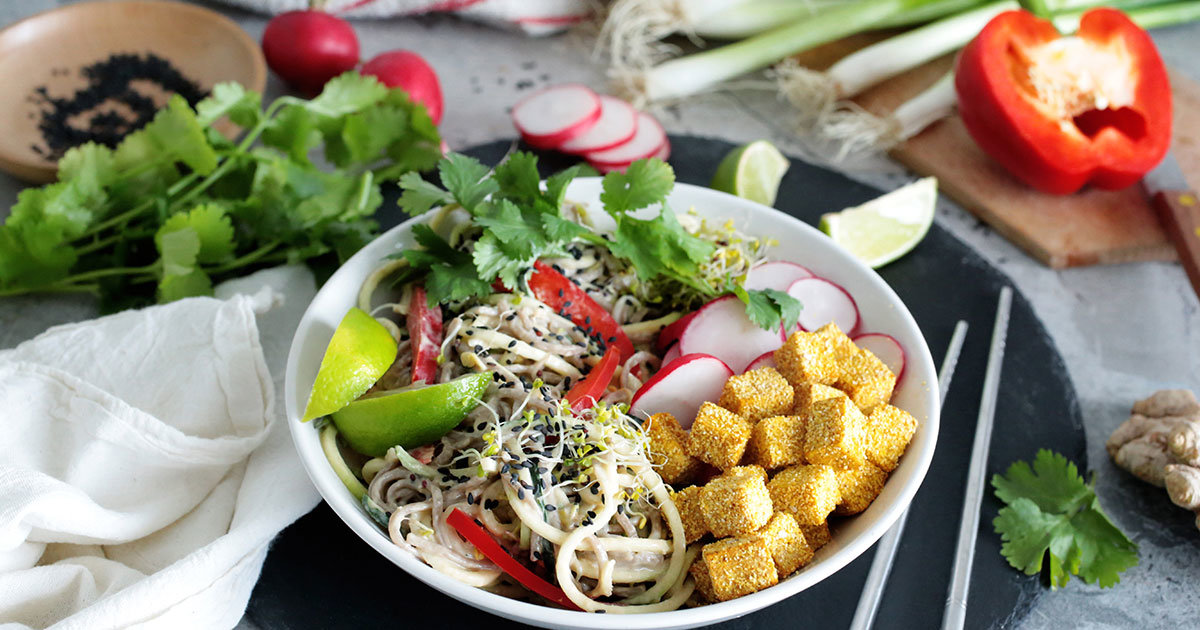 On the Japanese Okinawa Islands, people live longer than anywhere else. The islanders owe this longevity to their diet. We’ll tell you what’s behind the Okinawa diet.

The Okinawa diet owes its name to the island archipelago of the same name in southern Japan. There, the average life expectancy of people is 86 years for women and 78 years for men, higher than anywhere else in the world. It’s no wonder that most of the world’s centenarians live there.

But it gets even better: The inhabitants of this archipelago do not only live to be extremely old but also stay surprisingly fit, both mentally and physically! The secret of this top performance? The nutrition of course! But what does the famous Okinawa diet actually look like?

The principle of the Okinawa Diet

The Okinawa people are attracting more and more attention. Not only scientists are increasingly asking themselves: How does this island population manage to age so healthily?

Of course, the hereditary factor plays a role, but lifestyle habits, especially a low-fat and low-calorie diet, certainly contribute to this phenomenon in the same way. No wonder that nutrition specialists and dieticians are particularly interested in the eating habits of this population group.

The Okinawa diet is based on a semi-vegetarian, low-fat diet:

One of the main goals of the Okinawa diet is to reduce calorie intake without counting calories in order to grow old with a healthy feel-good weight: The Okinawa inhabitants consume on average about 20% less calories than the rest of the Japanese, some centenarians only about 1100 Kcal per day. A figure that is well below the recommended daily calorie intake for this age group and deviates significantly from the reference values.

Eat well and in moderation:

How do these people manage to eat so little? Quite simply: by putting quality before quantity! A central concept of the Okinawa diet is therefore the calorie density of the food, i.e. the calorie content per gram (number of calories divided by grams per serving).

The Okinawa diet also focuses on moderation: it is recommended to stop eating before reaching full satiety. This principle is called “Hara hachi bu” and means as much as “eight parts of ten full” (in plain language: you stop eating when your stomach is 80% full). In addition, the meals are taken in small portions.

Okinawa diet: The most important rules

The dietary rules of the Okinawa diet are as follows:

Eating at will: Foods with a calorie density below 0.7:

Food in moderation: Foods with a calorie density between 0.8 and 1.5:

Food in small quantities: Foods with a calorie density between 1.6 and 3:

Four. Eat rarely: Foods with a calorie density above 3:

By eating foods with (extremely) low calorie density, it is possible to consume fewer calories, as these products quickly lead to a feeling of satiety. A low-calorie diet also produces fewer toxins, which in turn increases life expectancy.

This is a typical day menu of the Okinawa diet (European version):

Does the Okinawa Diet really work?

The Okinawa diet can lead to weight loss in the long run, even if it is not its ultimate goal. This diet should also help prevent chronic diseases and age healthily.

By consuming foods with a low calorie density, the feeling of satiety is faster, which can lead to less food intake and support weight loss.

It has been proven in animals that a reduced calorie intake ensures a longer life expectancy. In humans, calorie restriction has health benefits such as a better fat balance (cholesterol, triglycerides).

More than a diet plan

The Okinawa diet is more than just a targeted diet plan and, in addition to the dietary rules already mentioned, also includes a healthy lifestyle in a broader sense: lots of exercise, a conscious attitude to life and community life are other aspects that play a role in the longevity of Okinawa residents.

Pros of the Okinawa diet

As the Okinawa diet is based on a fibre- and protein-rich diet, a feeling of satiety quickly sets in. There are no studies available that prove the extent of weight loss through Okinawa nutrition. However, by reducing the feeling of satiety more quickly when consuming foods with low calorie density, the total calorie intake can be reduced, which in turn can lead to weight loss.

Cons of the Okinawa diet

Result: Not everyone is full after the prescribed meals, which can make it difficult to stick to the diet in the long run.

But be careful: the consumption of algae can be harmful to the health of people with overactive or underactive thyroid glands. Some specialists in the Okinawa diet also warn against the occurrence of various deficiency symptoms.

Caution: The Okinawa diet should be performed under the supervision of a nutritionist or physician, as reducing the daily calorie intake can lead to deficiency symptoms.